(Text by Mireia Martínez i Sellarès)

Dorothy Vaughan (née Johnson) was born on September 20, 1910 in Kansas City, Missouri and died on November 10, 2008 in Hampton, Virginia. She was an American mathematician and programmer who worked as a computer at the National Advisory Committee for Aeronautics (NACA), the predecessor of the National Aeronautics and Space Administration (NASA).

Dorothy Vaughan graduated in 1929 with a Bachelor in Science and started working as a mathematics teacher at a high school in Farmville, Virginia. In 1932, she married Howard Vaughan and they had six children. In 1943, in the middle of WWII, Vaughan and her family moved to Newport News, where she started working at the Langley Memorial Aeronautical Laboratory. She thought it would be a simple war job, lasting for a few months, but she ended up working there until 1971, way after the war had finished.

At Langley, Dorothy began as a “human computer” at the West Area Computing unit, which was made up entirely of African-American women. The so-called West Computers were assigned a separate dining hall and bathroom. The job of these “human computers” consisted in running complex computations and analyzing data for aerospace engineers. In 1949, she became the manager of the West Area Computing unit, making her the first black person to become a manager at the NACA and one of its few female managers. She became a strong advocate for her colleagues, speaking up for them when they needed promotions or raises.

In 1958, the NACA became the NASA and the separation of work units by skin color stopped. Many women from the West Area Computing unit—and Dorothy among them—started working in the new Analysis and Computation Division, in which men and women, black and white, worked together. With the arrival of mechanical computers, human calculations were not as necessary anymore, so Vaughan became an expert in the programming language FORTRAN and kept contributing to important programs within the NASA.

The career and contributions of Dorothy Vaughan to the Space Race, as well as two of the most successful “computers” she ever supervised (Mary Jackson and Katherine Johnson) are narrated in the popular book Hidden Figures, by Margot Lee Shetterly. The book was then adapted into a movie with the same name in 2016.

https://www.thecut.com/2016/08/dorothy-vaughan-space-race-c-v-r.html An excerpt from the book Hidden Figures. 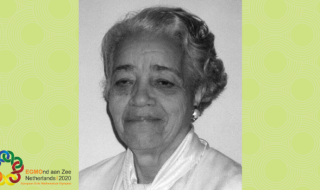