(Text by Mireia Martínez i Sellarès.)

María Josefa Wonenburger Planells was born on July 19, 1927 in Montrove-Oleiros, Spain. Her family owned a foundry, so they wished for María to study engineering and continue with the family business. Yet, her family always respected her love for mathematics and supported her throughout her studies. Although she finished secondary school in 1944, she did not start university until one year later because of the unstable political situation in Spain at that moment. In the meantime, she learned mathematics by herself reading books that her cousin, who was studying architecture, lent her. Since the University of Santiago de Compostela did not have a Mathematics Department yet, María decided to move to Madrid and pursue a Mathematics degree there.

At university, she quickly became a known figure: she was a good teacher and lots of students went to her for help with learning. In class, she listened without taking notes and later, after dinner, she would write down her own lecture notes. She was a diligent, hard-working student and mathematics were something very special for her, so she enjoyed studying a lot. In the last year of her undergraduate studies she learned about algebra and fell in love with that branch of mathematics, which would later become her area of expertise. From 1950 to 1953 she followed a doctoral program at the University of Madrid.

In 1953 María was granted the Fullbright Scholarship to go to the USA, which was being given that year for the first time. She wanted to work on algebra in Chicago under the supervision of A. Albert. This was not possible, so she was sent to Yale University to work with N. Jacobson instead. Jacobson was a friend of Albert’s and María was pleased anyway. In 1957 she got a obtained her doctoral degree with a thesis in a branch of algebra called Group Theory. When she went back to Spain, however, her doctoral thesis did not get accepted, so she decided to work on a second thesis. She finished it in 1960 but once more, because of bureaucratic reasons, she never got her doctoral degree.

By then, Wonenburger had become an expert in algebra, and through a recommendation of her Yale supervisor she got a postdoctoral position at the Queen University in Kingston, Canada. She worked there for two years and afterwards she got a position at the University of Toronto, where she stayed for four years. In Toronto, María was the only woman in the whole university who was teaching Mathematics, a situation she would get used to during her professional career. This was also the case for many other female mathematicians who were working around that time, many of them in algebra (which was a new and exciting discipline), and opening the way for women working at university. Some of her contemporaries who are worth mentioning were Emmy Noether, Olga Taussky-Todd, Hanna Neumann, and Marjorie Lee Browne. María supervised one graduate student in Toronto, the mathematician Robert Moody, who personally asked her to be his supervisor. This was a weird situation for her, since she was a foreigner, the only female professor and Moody was her first PhD student. She accepted anyway and Moody graduated in 1966.

Between 1966 and 1983, Wonenburger worked in the USA, first in Buffalo as an associated professor and later in Indiana as a full professor. She also got important work offers from many other north-american universities. Ironically, she got very poor offers from Spanish universities; she was told to apply to some minor positions and that “with luck” she might be able to get one of them some day. In Indiana she had a very fulfilling professional trajectory and worked side to side with important mathematicians such as Max Zorn, Paul Halmos, and Goro Azumaya. She supervised seven PhD students and continued with her research.

Sadly, in 1983 she stopped and went back to Spain: her mother had fallen ill and she left everything to go take care of her. In Spain, María and her work went unnoticed for a very long time. It was not until 2002 that her work started being recognised again after some nudging from a former colleague of Wonenburger’s at Buffalo, the Spanish mathematician Federico Gaeta, and the enthusiasm of two Galician mathematicians, María José Souto Salorio and Ana Doroteo Tarrío Tobar, who decided to contact her and write an article about her life and her contributions to mathematics. Luckily, in the last years of her life she was given some of the recognition she deserved: the aforementioned article about her was published in 2006, and in 2007 she became an honorary member of the Spanish Royal Mathematical Society. She got an honoris causa doctor degree from the University of A Coruña in 2010 and the Galician government created the María Josefa Wonenburger Planells Prize, which recognizes women who work in science and technology. Even a street was named after her in the Galician town A Grela.

When praised for her character, she used to say: “I have a tendency for happiness.” María Wonenburger died in A Coruña on June 14, 2014. 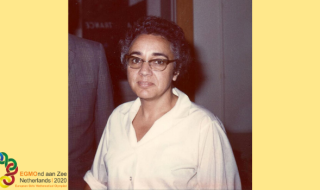