We introduced professor Marie Françoise Ouedraogo in the former post, a mathematician from Burkina Faso. She was so kind as to answer some questions from us via email, which we share in today’s post.

EGMO 2020: What motivated you to do not only one, but two doctoral theses? What brought you to those topics?

Marie Françoise: Since elementary school already, I was interested in calculation and solving problems rather than other subjects. In high school, I naturally decided to do mathematics and I continued in this way at University. I did a bachelor’s and master’s degree in mathematics and then I continued with a thesis in the field of algebra. What brought me in this topic is logic and abstraction. I liked manipulating abstract symbols and algebra is one of the branches of mathematics that define rules of manipulation of these abstract objects. At this time, the University of Ouagadougou, where I studied, was in an education system where one had to do two theses: a thesis called “thèse de troisième cycle” and then a thesis called “thèse d’Etat”. That is why I had to do a second thesis and I chose another topic and worked on the theory of pseudo-differential operators. It is an extension of differential operators and it gives a fundamental tool for the study of some partial differential equations. Pseudo-differential operators are also used in the study of quantum field theory in physics. It is this generalization and the use of functional analysis in the theory of operators that has attracted me to this area of ​​mathematics.

E: Has ‘being the first woman to get a PhD in mathematics in Burkina Faso’ been an important aspect of your career so far? Was it a motivation for you when you were working towards that title back in the 1990s?

M: Of course yes. I am the first woman holding a doctorate in mathematics in Burkina Faso. This means I have been a pioneer in this field and it has been a challenge. Being a pioneer in this field and in any other field is very rewarding and I am proud of it. But this has not been without problems: socio-cultural barriers, intolerance of some peers who don’t want to see you in “their field”, lack of role models to refer. But all these issues motivate me to work harder to achieve my objective and that’s what I continue to do in my career and my daily work.

E: Do you still nowadays face any of the problems you mentioned having gone through when working towards your doctorate thesis?

M: Nowadays, the problems I face are different. It is a permanent struggle to live and work in the mathematical environment which is made up mostly of men: there is the skepticism of your peers in your abilities, which forces you to work harder to prove that you have your place among mathematicians. There is also the sexism of certain colleagues who make hurtful remarks to you or who do what they take as jokes on women while watching out of eye corner to see your reaction. In everyday life there is also the problem of finding a balance between work and family life.

E: Most of the women we have had on the series so far work and study at European and North American universities. You have experienced academic life in France as well as in Burkina Faso: are there any differences/similarities in the university environment that stand out to you? Maybe also specifically as a woman in academia?

M: I actually did a thesis at Université Blaise Pascal of Clermont-Ferrand in France. There are similarities and differences in the university environment in France and in Burkina Faso. In France, there are many more women in mathematics, and also there is less pressure from the family to dissuade women from doing mathematics. It should also be noted that family responsibilities are much more distributed with men, which leaves more time and space to devote to mathematics. On the other hand, there are still associations like “femmes et maths” and others who work for the promotion of girls and women in math, and also EWM (European Women in Mathematics) and even AWM (Association for Women in Mathematics). This shows that equality of treatment between men and women in mathematics, whether in France, Europe or Burkina Faso has not yet been achieved.

E: The EGMO is a mathematical olympiad just for girls. Do you have something like this in Burkina Faso? Does the AWMA support any activities among high school female students?

M: We don’t have mathematical olympiad just for girls in Burkina Faso. The African Women in Mathematics Association (AWMA) was established in July 2013 in Cape Town, South Africa. Its main purpose is to promote women in mathematics in Africa and to promote mathematics among young girls and women in Africa. Activities of AWMA include research workshops, outreach for high school students as well as undergraduate and graduate students. Since then some national associations have been created with similar goals. In some countries in Africa, there is an activity called “Miss Mathematics”. It consists to organise a competition in mathematics in the first cycle and second cycle of high school. The best girls obtain grants to pursue studies in mathematics. There is also the Pan African Mathematics Olympiad organised by the African Mathematical Union each year. The top female contestant by total number of points is crowned “African Mathematics Queen”. 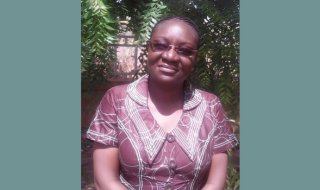