(Interview by Mireia Martínez i Sellarès. Image by Pilar Bayer i Isant)

This is the second part of an interview we did last June with Dr. Pilar Bayer, chair of Algebra and Emeritus Professor at the Universitat de Barcelona. You can read the first part here.

P: So as I was wondering how to find a topic for my thesis, another Mexican professor arrived at the university. Carles Perelló told me: “You can talk to him because he likes number theory.” This professor told me, “There are these articles I like a lot from a German mathematician called Neukirch.” I told him that my German was far from good but he just replied, “Trust me, you’ll love them.” I had learned some German earlier on and during my degree I had used a German book in a topology course. So I trusted that the articles were nice and, armed with a pencil and a dictionary, first translated the whole thing in a different notebook. Then I found out that Neukirch had just finished supervising a thesis, and somehow I got my hands onto a copy of said thesis and translated all 90 pages of it too.

P: No, no, we didn’t have that! So German words can have multiple meanings, but they only have one mathematical [meaning]: I took a little notebook and made myself a sort of dictionary German-Catalan. Once the whole thing was translated I already started having ideas for my own thesis, because those articles were fantastic. I didn’t come up with anything spectacular, but at least it was something along those lines.

M: But Pilar, you were on your own, you didn’t know German… I mean, wow!

P: (Smiles.) So Griselda and I kept meeting, each working on our own thesis but talking to each other when we encountered any problem. Meantime, that professor who was supposed to be supervising us, decided that Linés, who was still in Madrid, should take up Griselda’s thesis and he would keep “supervising” mine. Once I had everything written down, before typing it up, I asked him if he would like to have a look:  “Of course, it will be my pleasure.” He never did, and I started typing it up. Once it was typed up, before binding it, I asked again in case he might want to give some feedback: “Yes, of course! Don’t worry in the slightest.” Nothing happened and so I binded the thesis. So now everything was ready and we just had to appoint a jury. It was September, and from the UAB they told me that if I got my doctor title they would offer me a good position, so I went to Mallol and asked him if we could arrange it so that I could defend my thesis soon: “Worry not, worry not.” This was in September: I ended up defending my thesis in March because “it was a lot of work to find the 5 members of the jury.”

M: Of course, you see: one every month, and holidays during Christmas! (Laughs.)

P: Two days before my thesis defense I went to his office and told him that both Griselda and I would be defending our theses soon, and that I would like to practice with him beforehand. He told me to go to his office the next day at 12pm, and so I did. I remember just writing on the blackboard: “Let A be a Dedekind ring…” He had left his door open, and there was a telephone in the corridor that started ringing. “Give me a moment, Miss Bayer.” When he came back, he said, “You know what, Miss Bayer, I am sure everything will go perfectly tomorrow. You can rest assured it will be fine. Go, go.”

P: Well, Griselda didn’t even get that, because her supervisor was in Madrid! They just signed as if they had been our supervisors, and that was it.

M: But wait, how did you feel about this?

P: Terrible! Terrible. I was very scared, and I felt as if what I’d done was not really a thesis at all. Then the “Journées Arithmetiques” took place, an international congress that took place every two years. I’d been there for previous sessions, to see what it was all about. A lot of French female mathematicians where there, like Yvette Amice. She was magnificent. I heard her talk in that congress –which in itself was already quite the experience, since it was the first time I had seen a women talk mathematics on a blackboard in front of an audience. I remember her vividly because she was wearing a schal! I have never been able to explain at the blackboard like her, while wearing a schal and going like this… (Gestures swaying movements that would move the schal around, laughs fondly.) I just thought, “What a woman!” So, after finishing my thesis I went to the Journées…

M: With or without a schal?

P: (Laughs.) I have bought many schals in my life but I have never been able to wear them while teaching the way Yvette did! They’re very cute, but I just keep them in my closet! (Laughs.) So I went to France and gave my thesis to Yvette Amice. She looked at it and said, “But this is what the Germans are working on! This is what is being done in Regensburg.”

M: Was Neukirch working in Regensburg?

P: Precisely. Yvette told me that Neukirch was there at the Journées Arithmétiques and I was very impressed.She went to him with her schal and gave him my thesis. At some point during the congress Neukirch came to me and said, “Who has taught you all of this?” Because he’d seen his article, another article, the thesis… all being cited [in my thesis]. He said, “Isn’t all of this in German?”, and I said, “Yes sir, but I translated it.” He didn’t say anything else. This was in the summer, and that September I received a letter from Germany informing me that a position as “Wissenschaftliche Assistentin” (research assistant) was being offered and asking whether I would want to apply for it.

M: Neukirch got the letter sent to you?

P: Yes, he did. So I explained at home what had happened, and my parents said, “Since you won’t get it, don’t worry!” Also my colleagues at work said, “Bah, just apply since they won’t really give you the position anyway.” And so I did: I filled in all the paperwork and sent it off. You can imagine my shock when I did get the position. I thought, “Oh dear, what have I done!”

M: Did you never think about it as a real possibility?

P: No! I was preparing a state exam to apply for a position in Topology in the Canary Islands, so you get the picture. When I decided that I would go to Germany, I got myself a private German teacher to prepare for it. But then the following happened. This was in September 1976, and I was meant to move to Germany in May 1977. But then in October 1976 my father fell seriously ill. I told Griselda, “I’ll send a letter to Germany and let them know I can not go since I am an only child and my father is doing very badly.” But Griselda, being very down to earth, told me: “Listen, your contract starts in May, and you father is very, very sick. I don’t mean to say anything, but just wait and see how things unfold.”

P: Can you imagine the confusion I felt inside? My mind went blank, Griselda was so brave… So my dad fell ill in October and passed away in February. Me, being an only child, and my mum, a widow… This was in February, and in May I left for Germany.

M: So you did go regardless?

P: Yes, I went. But those four months were so hard! My father was perfectly healthy before and it all happened very quickly. He had a brain tumor, it was a horrible experience. So I arrived in Germany, having just gone through all of this, and I remember often waking up at 4am with all those memories in my head… It was very, very hard.

M: Had you at least been to Germany before? Or did you go just like that?

P: I’d never been there before, no. Luckily the University of Regensburg had a very nice support system for international students to help them with accommodation and all these things, so everything was easy. Besides, I went there feeling very insecure about myself, thinking that it took me very long to do things, so I arrived there and got work to do, and all of a sudden they were saying to me, “Oh, you finished already? You did this? You did that?” This had a big impact on me. Besides, I used to teach a lot of hours here in Barcelona, and there I only did the minimum. I started getting along very well with the people at the seminar I was attending and I started presenting too. First I would do it in English, since I had enough trouble understanding Deligne’s Theorem to also think about “der”, “die”, “das”. But after about 7 or 8 moths they told me, “That’s it, from now on you have to present in German.” I said, “I’ll make so many mistakes!” and they replied, “Mistakes are beautiful.” It was magnific.

So there is where I completely dedicated myself to work and to properly learn how to do mathematics. That you first have the ideas, then let them get ripe, then work on them. That you may start working on something in February and only start understanding it in September, and that this is absolutely natural. And still they would say, “But Miss Bayer, you are so fast!” It was fantastic!

M: It almost sounds like it happened at the right time, doesn’t it? Like it was almost therapeutic to you.

P: Exactly, totally. Had I stayed in Barcelona, it would have been very rough. And I felt total admiration for Griselda because had it not been for her, I wouldn’t have gone to Regensburg at all and I would have probably quit. In the meantime she also passed the state exam and got a position at the university and was able to stop working in high schools, so she ended up as a university professor.

M: What did she work on? Number theory too?

P: She did whatever was needed, but mostly she taught Didactics and Number Theory, since she had worked at high school. She really was ahead of her time, and she was 20 years older than me! And after she retired she kept studying and translated Gauss’ Disquisitiones Arithmeticae into Catalan. 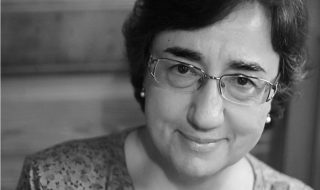