Mathematician Karma Dajani was born in Lebanon, in the Middle East. She explains: “I went to American schools, so I had a good education.” Karma loved math from the beginning and she was good at it. As for languages, that was a different story: “English was ok, but Arabic was really really bad, it was the only thing I couldn’t pass with good grades.”

When the time arrived to go to university, social expectations played a big role at first: “In my culture you should have a profession, so everybody was doing medicine or engineering. And actually I did go to medicine, but I couldn’t stand the lab.” A high school friend of Karma’s, who was doing mathematics and loving it, asked her, “Why don’t you switch?” And after one year Karma did: “I was doing mathematics all the time. But I mean, I loved it so it came very easy to me. I really think it was the best decision I have ever made in my life, to switch to mathematics.” The transition went without trouble: “The courses I had taken in medicine could count as my science electives. Besides, math was a love affair. I could see things quickly and that made me very enthusiastic!”

Dajani finished her bachelor in math two years after switching majors. At that time there was a civil war in Lebanon so Karma and her whole family moved to the United States, where she started her doctoral studies at the George Washington University, in Washington DC. Her PhD adventure started in the field of Functional Analysis, but “it was very dry, I didn’t feel like it moved me.” So she tried Graph Theory next, and “again, it didn’t move me.” She considered switching universities, because the department where she studied was small and she felt like she “didn’t have a lot of options where I was.” She had even been accepted somewhere else, but then mathematician Dan Ullman arrived from Berkeley as a new faculty and was doing something called Ergodic Theory, and that’s how she started working in that field too.

However, after a year Ullman switched to Graph Theory and Karma kept working on Ergodic Theory by herself. Things were not easy: “I was frustrated and at one point felt like maybe I should quit because I couldn’t go on like that. You start losing confidence, you know… Actually I went to a company to try and find a job, but nothing was moving me. I mean, my heart was in mathematics and I knew I wanted to do mathematics.” She was determined: “I decided: ‘Even if this is going to take me my whole life, I am going to keep at it.’”  Once again a new faculty member, this time E. Arthur Robinson, Jr., arrived at George Washington University. Dajani remarks: “Actually he didn’t help me with mathematics, he was just being supportive and I could finish my thesis in one year after that. So I just needed some support, somebody that believed in me.”

After defending her PhD thesis, Karma did a postdoc at University of Maryland College Park and another one at Chapel Hill in North Carolina. “Then I got a job in Mobile, Alabama, but I didn’t like the city at all. It is southern and the atmosphere was very racist. I didn’t want that.” Things changed when she met Dutch mathematician and her current husband Cor Kraaikamp in a conference in Yale: “It was an overseas relationship for a few months, and then I got an NWO visitor’s grant for eight months at the TU Delft, so I said, ‘Okay, let me come and try, see if I want this life.’ I came for eight months and never returned.” After those eight months, Karma got a temporary job in Delft for two years, but before that period finished there was a job offer at Utrecht University and she took it. “And I am still here!” she adds, laughing.

All in all, she says: “I am glad I moved. I really like Europe. At the beginning I had a hard time going from the States to Europe. I mean, there is a cultural difference, and the language was killing me… But now I am really very happy I am here, I don’t really want to go back. My family is still in the States so when I go on vacation or whatever I go to the States, but my home is here. I feel I belong.” 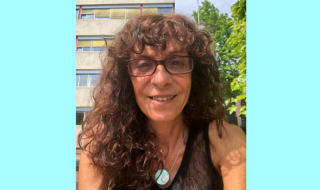